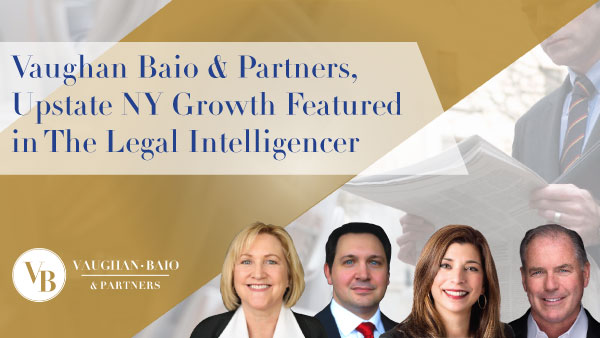 Vaughan Baio & Partners was featured in The Legal Intelligencer on Tuesday, August 10, 2021, on the news that the firm “grew its head count by more than one-third” with the addition of nine workers’ compensation and employment attorneys and the opening of two new offices in upstate New York – in Albany and Syracuse.

The team of eight partners and one associate – led by Zachary H. Pratt and Tracey McLean – build on the firm’s existing strength in workers’ compensation and employment law. Founding Partners Joseph Vaughan and Madeline Baio also said the firm “has made inroads with the trucking and transportation industry and has a growing focus in general liability and professional liability.”

“New York was a venue we really wanted to grow our footprint in, and that has been a target of ours for close to a year since we founded the firm,” Baio said in an interview Tuesday. “This opportunity with Zach and Tracey’s team is really a first major step in the state of New York to grow that venue and we’re hoping to recruit other attorneys across the state to help us [continue our growth there].”

The addition of this new team follows an active 15 months of recruitment for the Philadelphia-based firm, which launched in June 2020 with 14 lawyers and the rebranded name of Vaughan Baio & Partners. In 2020, the firm recruited three attorneys in Philadelphia in August, followed by four New Brunswick, New Jersey, attorneys in October.

Vaughan said the firm has picked up new work from disillusioned clients since the outset of the pandemic because drop-offs in attorney-client communication compelled them to find other outside counsel.

“We did hear that clients were working with other firms because they weren’t getting feedback,” Vaughan said. “That’s a constant complaint we try to stay vigilant about all the time.”

Pratt said the group made its move because of a shared vision for handling cases in the employment law and workers’ compensation space.

“Workers’ compensation is a very volume-heavy practice, and you need to have really specific team structures in place to keep up that level of service with that volume,” Pratt said in an interview with the Legal Intelligencer on Tuesday. “It was really important for us that we found people who agreed with our vision to accomplish that.”

McLean similarly noted her group’s approach to client relationships when asked about the move.

“I wanted to get back to my roots, and be a lawyer who happens to market on occasion, and not a marketer who happens to lawyer on occasion,” McLean said in an email. “Connecting with my clients at a personal level, and really understanding the subtle nuances of their unique needs, is one of the things that makes being a lawyer so much fun, and that just isn’t possible [for me] in monolithic firm cultures.”

Pratt also noted “there were some additional things we thought we should do … in furtherance of client services, and those weren’t necessarily the ones that leadership [at Goldberg Segalla] at the time wanted us to do,” Pratt said.

At Vaughan Baio, he said, “We’re very excited that leadership here agrees with us about how best to go about that.”

Rather than assigning several lawyers to a case in a single billing cycle, which is typical for workers’ compensation and employment matters in New York state, Pratt said his team maintains continuity of counsel through a one-attorney-one-file approach, which he said cuts down on client confusion.

“What we’ve certainly identified is that very little annoys clients more than that [lack of continuity],” Vaughan said. “That was what we had the most in common: getting to know the clients, having open channels of communication and providing the services they want, not necessarily ones we dictate they should have.”