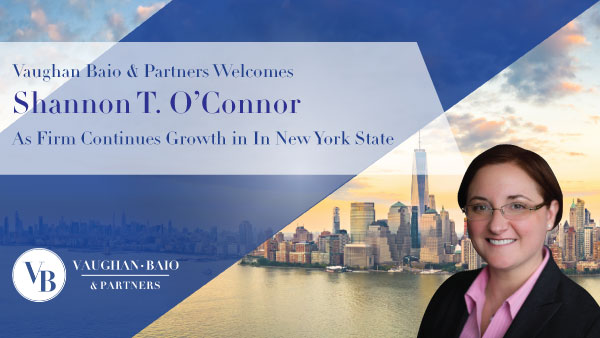 PHILADELPHIA, NOVEMBER 9, 2021 – Vaughan Baio & Partners is pleased to welcome Shannon T. O’Connor, who joins the firm as Partner in the Labor, Employment & Liability Practice Group. Ms. O’Connor is a seasoned and well-respected Federal litigator who is admitted in all four federal courts in New York State.  In addition, she’s also recognized for her successful Appellate practice. She has argued and briefed issues before the U.S. Court of Appeals Second Circuit and has submitted amicus briefs, one of which received the International Municipal Lawyers Association (IMLA) Amicus Service Award. In October Ms. O’Connor was recertified as an IMLA Local Government Fellow for another five-year term, from 2021-2026.

Ms. O’Connor is considered one of the leading attorneys for local governments, municipalities and law enforcement entities throughout New York State, representing them in cutting edge constitutional cases that deal with complex societal issues. In addition she also brings extensive experience representing both public and private clients before state and federal administrative agencies.

The addition of Ms. O’Connor comes soon after nine of her colleagues at Goldberg Segalla also left that firm to join Vaughan Baio. Those attorneys, led by Partners Tracey A. McLean and Zachary H. Pratt, established the firm’s new offices in Albany and Syracuse, N.Y., where Ms. O’Connor will be based.

“I wake up every day thinking about my duties and obligations to my clients,” said Ms. O’Connor.  “I know my colleagues at Vaughan Baio share that same commitment and I’m excited to work alongside them, as we serve our clients and guide them through the legal challenges they’ll face in the months and years ahead.”

“Shannon has earned the trust of clients, government officials and legal colleagues throughout New York State and she has the track record of success to warrant that trust,” said Madeline Baio.

“The addition of Shannon to our New York team builds on our capabilities in New York and New Jersey, where Peter P. Perla, Jr. and his colleagues Susie Burns, Cindy Ringel and Joseph P. Horan, II have cultivated a respected reputation for their work with public sector entities throughout that state,” said Joseph E. Vaughan.