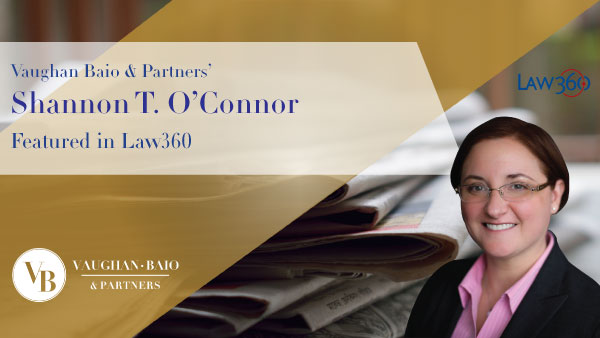 Vaughan Baio & Partners’ newest addition, Shannon T. O’Connor, was highlighted in the article, “Vaughan Baio Grows NY Practice with Goldberg Segalla Hire,” that appeared in Law360 on Monday, November 1. “O’Connor…with vast experience representing local governments and law enforcement in the state…is the 10th attorney from Goldberg Segalla that Vaughan Baio has hired since August as the firm builds its presence in New York. O’Connor will be joining as partner in the firm’s public sector and employment practice and liability groups.”

“What drew me to Vaughan Baio was just their commitment to building a strong team with a solid moral compass,” O’Connor told Law360 on Monday. “Frankly, when you work with public sector clients like I do, and you have taxpayer funds involved, you need to be beyond reproach with your integrity and character and both Madeline [Baio] and Joe [Vaughan] demand that of themselves and they are committed to creating an atmosphere that fosters that type of culture.”

O’Connor said she has primarily worked in federal litigation representing municipalities in constitutional and civil rights matters, as well as employment discrimination cases. She has handled nearly 10 trials in the Northern District of New York and has significant appellate experience in the Second Circuit.

O’Connor said one of her most memorable cases in New York federal court was winning a trial where she defended two police officers who shot and injured a carjacking suspect who was apprehended following a high-speed car chase and foot pursuit. The suspect had been shooting indiscriminately in a neighborhood during the foot chase, O’Connor said.

“That case exemplifies the types of issues that I’ve had to address and deal with [for] both the community and my clients,” she said.

O’Connor said she became interested in her area of law because she comes “from a long line of public servants,” including family members who were police officers, firefighters and teachers. Her father was commissioner of the Department of Public Works for the city of Syracuse, she said.

“I think that’s why I have such a strong client base in New York state because I speak their language. I know what they talk about at dinner. I know what frustrates them,” she said. “I know what makes their job more difficult and I really like figuring out solutions to their problems.”

O’Connor will be working in the same offices as her former colleagues from Goldberg Segalla, who established Vaughan Baio’s new locations in Albany and Syracuse. She also joins forces with attorneys Peter P. Perla, Jr., Susie Burns, Joseph P. Horan, II, and Cindy Ringel, who have cultivated and continue to grow Vaughan Baio’s presence and reputation throughout the public sector in New Jersey.

“Shannon has earned the trust of clients, government officials and legal colleagues throughout New York State and she has the track record of success to warrant that trust,” Baio said in a statement.