You are here: Home / News / Vaughan Baio & Partners Quoted in Law360 On New Jersey Litigation to Watch in 2021 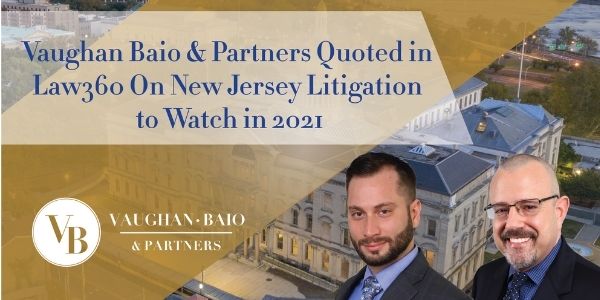 In the article, cases discussed – about cannabis, COVID-19 and judicial security – are likely to “chart new courses in the areas of civil rights for businesses, protections and obligations in the workplace, and the scope of insurance and benefits coverage.”

In one of the state’s most high-profile employment lawsuits resulting from the coronavirus — Christopher Neuwirth v. State of New Jersey et al., — a former New Jersey health official alleged that he was fired by Gov. Murphy’s administration for resisting the request to administer scarce Covid tests to relatives of a high-ranking staffer. While part of the lawsuit was dismissed in October, the plaintiff Neuwirth is still pursuing the rest of his claims.

As for Neuwirth’s remaining claims, Perla said the employment defense bar is anxious to see what approach courts will be taking to the growing number of coronavirus-related workplace lawsuits.

“Will the New Jersey courts be empathetic to employers who have struggled to maintain their businesses and have been forced to make tough employment decisions during these trying and unprecedented times, or will the courts be more sympathetic to employees? Right now it’s too early to tell, but it is an issue we will be closely watching as these cases unfold,” Perla said.

Less than a month after New Jersey voters approved the regulated use of marijuana by adults, the state Supreme Court heard an argument by a construction company fighting a court order to reimburse an employee for his medical marijuana use stemming from injuries sustained on the job. The case is Vincent Hager v. M&K Construction.

The construction company argued it would be abetting illegal drug possession under the federal Controlled Substances Act (CSA), contrary to a lower court’s ruling that there’s no conflict in this case between the CSA and state laws permitting medical marijuana.

While insurers and employers have wrestled with the contradictory nature of New Jersey’s medical marijuana program and the CSA, the winds seem to be blowing toward more protections for cannabis users, according to attorney Anthony Skalski.

Skalski, who focuses on workers’ compensation matters, pointed to the fact that New Jersey voters approved the legalization of small amounts of recreational cannabis in November, as well as the existence of pending state legislation that compel workers’ compensation carriers and automobile insurance companies to cover medical marijuana costs.

“One way or the other, through court opinion or legislative act, employers and insurance carriers will likely be compelled to cover the costs of medical marijuana under New Jersey workers’ compensation law,” Skalski said.