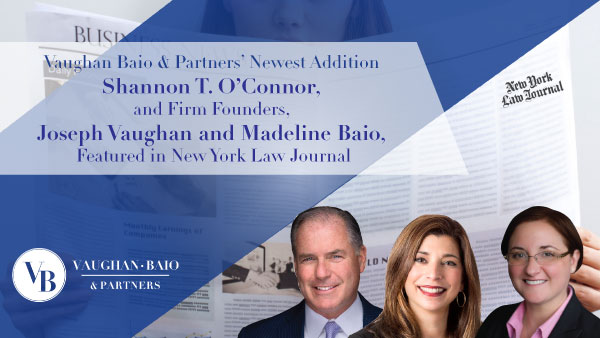 Vaughan Baio & Partners’ most recent hire – New York State federal litigator Shannon T. O’Connor – and the firm’s Co-Founders – Joe Vaughan and Madeline Baio – were featured in the article, “Plucky New Firm Continues Empire State Expansion with Addition of Syracuse-Based Partner,” which appeared in the New York Law Journal on November 9, 2021. In the article, Reporter Andrew Denney reveals how Shannon’s background and upbringing in Syracuse led her to practice law. He also learned more about Joe and Madeline’s decision to launch the rebranded Vaughan Baio & Partners just months into the pandemic lockdown and about the dynamic growth the firm has experienced since then.

As the daughter of two Syracuse municipal workers—her father a public works director, her mother a code enforcement officer—Shannon O’Connor is passionate about advocating for civil servants.

That upbringing drove O’Connor to start working with her hometown’s Department of Law after she got her J.D., which occasionally gave her the opportunity to represent people she knew back in high school who went on to work for the city themselves.

“It moved me and made me realize that representing public servants has a larger purpose,” O’Connor said of her time as an assistant corporation counsel in Syracuse. “You can have an impact on your community and your neighborhood.”

O’Connor took that experience with her into private practice, where she spent several years with the Philadelphia-based Goldberg Segalla representing local governments in New York’s four federal courts.

But last year, word started getting around about a new Philadelphia-based firm forged by two veteran attorneys who hung a shingle in June 2020.

And the founding partners of the new venture, Joseph Vaughan and Madeline Baio, who each have been in practice for 37 years, had their eyes on the Empire State as the place to grow.

In recent months, nine of O’Connor’s colleagues at Goldberg Segalla have jumped ship to join (https://www.law.com/thelegalintelligencer/2021/08/10/phila-boutique-takes-9-lawyer-workers-comp-team- from-goldberg-segalla-to-lead-ny-expansion/) Vaughan Baio & Partners to fill new offices in Albany and Syracuse—a move that grew the firm’s roster by about one-third.

Drawn to the idea of working for a firm with the chutzpah to launch in the middle of a global pandemic, O’Connor recently became the tenth former Goldberg Segalla attorney to join one of the firm’s Albany and Syracuse offices.

“That’s gutsy. I like that, being a working-class city kid. I’m drawn to that mentality,” she told the Law Journal.

With O’Connor on board, Vaughan Baio now has 32 attorneys working in offices scattered throughout the Northeast.

Launched as an employment and workers’ compensation boutique, Vaughan told the Law Journal that the firm is also building its trucking and transportation, products liability and professional liability practices.

“We’re adding bench strength to each of those areas,” said Vaughan, who is based in Philadelphia.

Vaughan said attorneys have been drawn to Vaughan Baio’s “flat” organizational structure and collegial atmosphere. When considering new talent to grow its ranks, the firm considers how well candidates would work with the rest of the team.

And with his and Baio’s combined experience, they’ve been around long enough to have met the types of lawyers who would work well with their nascent firms—and those who wouldn’t.