You are here: Home / General / Vaughan Baio & Partners’ Jeffrey L. Oster Quoted In Transport Topics on How a Trucking Company Should Respond Following a Collision 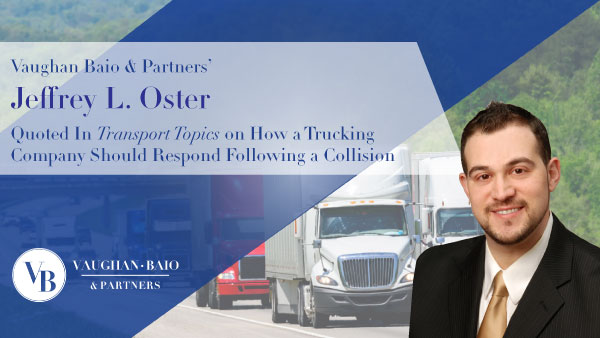 Jeffrey L. Oster was quoted in the Transport Topics article, “First 24 Hours After a Crash Can Affect Legal Implications Later,” which appeared online on September 1, 2021 and in the publication’s September 6, 2021 print edition. The article discusses actions that motor carriers should consider taking in the time immediately following a truck crash and how those actions can impact the legal outcome of the incident — regardless of its severity. Jeffrey, a Partner with the firm, focuses his practice on general negligence, motor vehicle liability, trucking, and premises liability law (among several other practice areas).

Jeffrey advised that, even in a fender bender,  it is a good idea for the motor carrier’s driver to take photos of the accident scene, including property damage.

“Take pictures of other people involved in the accident,” Oster said. “Take cellphone video of them walking about the scene. That’s going to protect the trucking company from someone then later saying that they are unable to walk, or were incapacitated and other claims that we see made.”

Attorneys and insurers generally agree that drivers should follow specific advice when involved in a crash:

Jeffrey, along with the other experts quoted in the article, concurred that drivers should always be professional and answer questions posed by police officers who come to the scene — but they should not admit guilt or assess blame. In some cases, it could be best for the driver to inform an officer that the carrier’s attorney must be contacted before answering any additional questions.