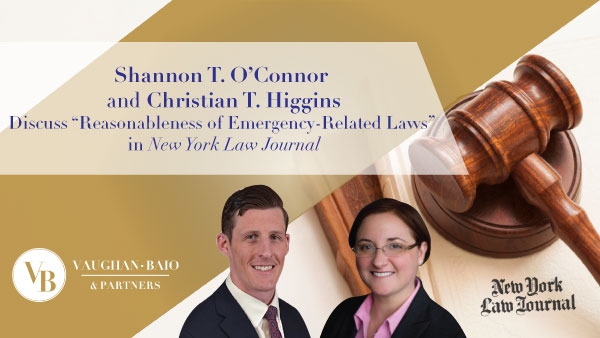 Shannon T. O’Connor and Christian T. Higgins, attorneys in the Employment Practice & Liability and Public Sector practice groups, co-authored the article, “Second Circuit’s Melendez Decision and the Reasonableness of Emergency-Related Laws,” in the New York Law Journal, January 7, 2022. In the article, Shannon and Christian discuss the significance of this case, which provides both the analytical framework for local governments to guide drafting and passing local ordinances in a response to a crisis, as well as provides private entities the pleading standard to challenge those emergency-related laws.

On Oct. 28, 2021, the U.S. Court of Appeals for the Second Circuit issued an important decision in Melendez v. City of New York, upholding laws adopted by the New York City Council that sought to address the impact of the COVID-19 pandemic on lessees, while reversing the lower court decision that prevented landlords from pursuing rent during the 16-month window in which the law was in effect. The case is significant as it not only provides the analytical framework for local governments to guide drafting and passing local ordinances in response to a crisis, but also provides private entities the pleading standard to challenge those pandemic or emergency related laws.

The Second Circuit panel concluded that the group of landlords seeking to challenge the sweeping legislation had pled sufficient facts to pursue their claims on the law’s failure to meet a “means” test thereby reviving commercial landlords’ constitutional challenges to certain laws enacted by New York City at the height of the COVID-19 pandemic. The landlords in the action consisted of small commercial building owners in Brooklyn, Queens and Manhattan who sued the City alleging violations of the U.S. Constitution’s Contracts Clause (Article 1, §10), which prohibits state law impairing contractual obligations. Specifically, the landlords challenged the constitutionality of NYC’s “Guaranty Law” which was enacted in May 2020 to permanently prohibit the enforcement of any personal guaranties of rent obligations arising under certain commercial leases during an almost sixteen- month period. Under the Guaranty Law, if a commercial tenant failed to pay rent owed for any time during that period, the landlord can never seek to recover those amounts from the guarantor.

The Second Circuit decided the case on appeal after the U.S. District Court for the Southern District of New York dismissed the landlords’ amended complaint for failure to state a claim on which relief could plausibly be granted. As for the Contracts Clause challenge, the district court determined that although the complaint plausibly alleged a substantial impairment of the landlords’ existing contractual relationships, the court dismissed the action because the Guaranty Law advanced a legitimate purpose and was a reasonable and necessary response to a “real emergency.” It noted that the law affords “substantial deference” to those policymakers making good-faith efforts to act in the public interest. The district court also dismissed certain free speech and due process challenges to City’s “Harassment Amendments,” which prohibit “threatening” residential or commercial tenants based on their COVID-19 status.

In a lengthy, well-written opinion, the Second Circuit panel discussed the City’s legislative and gubernatorial actions in response to the pandemic, the Guaranty Law, and the Contract Clause’s evolving jurisprudence. Although it agreed with the district court’s dismissal of the free speech and due process claims related to the Harassment Amendments, it reversed the dismissal of the Guaranty Law challenge. The landlords’ Guaranty Law challenge was sent back to the district court for further proceedings with instructions to apply the more detailed analytical framework that it had established.

‘Melendez’ Framework and Its Significance

In its opinion, the Second Circuit panel agreed with the district court’s application of a three-part balancing test derived from U.S. Supreme Court precedent, but it disagreed with the district court’s conclusion at the final step. The threshold issue of the three-part test is whether the state law “operated as a substantial impairment of a contractual relationship.” If such factors show a substantial impairment, the inquiry next turns to the means and ends of the legislation. This second inquiry is whether the state has advanced a “significant and legitimate public purpose” behind the regulation, such as remedying of a broad and general social or economic problem. The final inquiry is whether the state law is drawn in an “appropriate” and “reasonable” way.

Because the Guaranty Law permanently and unexpectedly relieved commercial lease guaranties for overdue rent payments arising over a 16-month period, the panel agreed that the landlords had plausibly alleged a “significant impairment” of contract. The court also agreed that the presence of the COVID-19 pandemic has prompted an economic and health emergency in the City, which weighed in favor of the City’s pursuit of a “significant and legitimate public purpose” for the law. Whether the law survived dismissal at the pleadings stage thus turned on the “reasonable” and “appropriate” means inquiry. While the court agreed that the law significantly impaired contractual agreements for the plausible purpose of ensuring functioning neighborhoods, it identified at least five “serious concerns” about the law as being a reasonable and appropriate means to pursue that purpose. The court’s analysis of these concerns pursuant to the third inquiry of the balancing test ultimately led it to revive the landlords’ constitutional challenge.

The court centered the “reasonable” and “appropriate” means inquiry on principles that were previously identified by the U.S. Supreme Court in a 1934 decision, Home Bldg. & Loan Ass’n v. Blaisdell, and its progeny of cases. In Blaisdell, the Supreme Court applied certain factors to locate the “limits upon the power of a State to abridge existing contractual relationships, even in the exercise of its otherwise legitimate police power.” By incorporating similar principles into the analysis of the City’s Guaranty Law, the Second Circuit panel made it clear that although the Clause must be construed to permit some ground for rational compromise, its constitutional limits are neither illusory nor non-existent. In the bigger picture, the court clearly established an approach for assessing the reasonableness and appropriateness of governmental action where the government has demonstrated some need for “rational compromise between individual rights and public welfare.” The court’s approach is based on Supreme Court precedent and may be instructive to other courts that have been asked to assess the validity of such governmental action under the Constitution.

The Second Circuit raised the following “five concerns” about the Guaranty Law being a reasonable and appropriate means to pursue the City’s public purpose, and these “concerns” may be understood as individual factors that guide the analysis. First, the law is not a “temporary” or “limited” impairment of a contract. Second, the law permanently excuses guarantors from pandemic-accrued rent liability even in circumstances where they do nothing to serve the public interest in generally ensuring functioning neighborhoods. Third, the City allocated the full economic burden of the law to landlords who are not responsible for the circumstances warranting relief. Fourth, the relief is not conditioned on need, and the record contained only anecdotal or conclusory statements by Council members. Fifth, although not necessary to defeat a Contracts Clause challenge, the law fails to provide for landlords or their principals to be compensated for damages or losses sustained as a result of their guaranties’ impairment. In addition to these “ve concerns,” the court emphasized that the parties may identify other circumstances relevant to determining whether the law is a reasonable and appropriate means to serve the City’s professed public purpose.

Because the Second Circuit in Melendez was only asked to decide whether the landlords’ Contracts Clause challenge was sufficient to survive a motion to dismiss, it did not determine whether the Guaranty Law in its current form is constitutional. However, the court’s opinion is significant for several other reasons, especially as it was considered against the backdrop of extensive federal and state action in response to the pandemic.

As a threshold significance, the court’s opinion establishes the outer limits of governmental authority to enact legislation that abridges existing contractual relationships. Second, it contours an analytical framework that not only provided a means for the small building owners to seek relief, but that clearly marked an avenue of approach for future litigants to attack the constitutionality of similar emergency legislation. Third, the court’s framework also serves as a guide to drafting legislation that withstands Contracts Clause scrutiny. As such, the case may be used as precedent to both uphold emergency related legislation, while at the same time be precedent to attack legislation. The decision only revives the cause of action on the Guaranty, it does not adjudicate them on the merits.

In application, the Second Circuit’s framework in Melendez may shield individuals owning small businesses or rental properties whose existing contractual relationships have been impaired by unreasonable and inappropriate pandemic- related laws, even where there is a demonstrated need for rational compromise between individual rights and public welfare. The Melendez decision makes it clear that the law does not afford “substantial deference” to policymakers merely because of their making good-faith efforts to act in the public interest. On the opposite side of the “v,” state and local lawmakers now have clearly delineated factors to consider prior to implementing pandemic-related laws that incidentally impair citizens’ existing contractual relationships.

Reprinted with permission from the January 7, 2022 edition of the New York Law Journal© 2022 ALM Media Properties, LLC. All rights reserved. Further duplication without permission is prohibited, contact 877-257-3382 or reprints@alm.com.