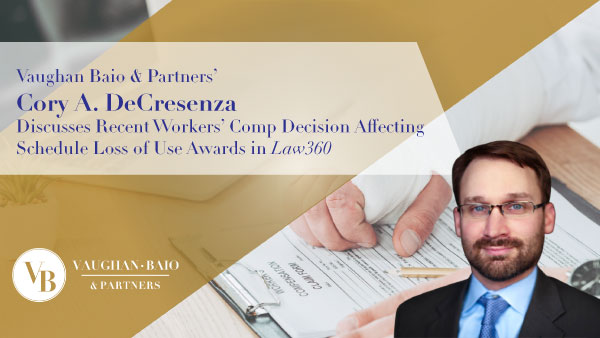 In his Law360 Expert Analysis article, “NY Workers’ Comp Ruling May Expand Claimant Benefits,” published May 2, 2022, Partner Cory A. DeCresenza examines the recent joint decision in Johnson v. City of New York, and Liuni v. Gander Mountain affecting the assessment of schedule of loss of use, or SLU, awards, which are granted for total or partial impairment of a body part in New York workers’ compensation claims.

The issue addressed was whether a subsequent SLU award must always be reduced by a prior SLU for a subpart — such as a hip, knee, shoulder or elbow — of the same body member, typically, the leg or the arm.

The New York Court of Appeals held that under Section 15 of the state’s Workers’ Compensation Law, separate SLU awards for different injuries to the same member are permissible where a claimant proves that the later injury by itself — and not in conjunction with the prior injury — has caused an increase in the SLU.

The decision significantly affects a carriers’ ability to take credit for prior permanency awards involving different subparts of the same member, and permits claimants to receive additional benefits that would have been barred under prior case law.

Despite the order of injuries, the claimant received his first SLU award in the 2009 file. He obtained a 50% SLU of the left leg and a 52.5% SLU of the right leg for the hips.

He then reached maximum medical improvement in the 2006 file when his doctor opined an 80% SLU of the left leg and 40% SLU of the right leg related to the knees.

Taken together, those two permanency awards equaled a total of a 130% SLU of the left leg and 92% of the right leg. Applying the 2018 decision in Matter of Genduso v. New York City Department of Education from the New York Appellate Division, Third Department  — which concluded that separate awards could not be made for individual subparts – that resulted in the claimant receiving an additional 30% SLU for the left leg and 0% for the right leg.

In Liuni, the claimant injured his left elbow in 2007 and received a 22.5% SLU of the left arm. In 2014, the claimant had a subsequent injury that was ultimately established in part for a left shoulder injury.

The New York Court of Appeals held that under Section 15 of the state’s Workers’ Compensation Law, separate SLU awards for different injuries to the same member are permissible where a claimant proves that the later injury by itself — and not in conjunction with the prior injury — has caused an increase in the SLU.

The workers’ compensation law judge agreed with the claimant’s doctor and found a 50% SLU of the arm.

However, the board modified to find that the two SLUs for the shoulder and elbow could not be treated as separate, that the SLU was 27.5% of the arm, and that claimant was entitled to a 5% SLU — i.e., 27.5% SLU minus the prior 22.5% SLU.

The Court of Appeals issued an eight-page analysis and decision affecting both claims and the Third Department’s Genduso holding.

The court noted that SLU awards were compensation allowed for a specified permanent partial disability due to the loss of, or loss of use of, a body member under the state’s Workers’ Compensation Law Section 15(3).

The Court of Appeals highlighted the statutory basis of the problem, noting that under Section 15(3), the members are the arm, leg, hand, foot, eye, thumb, first through fourth fingers, great toe and the remaining toes. The shoulder, elbow, hip and knee are not separately enumerated.

The court, however, reviewed its 2013 analysis in Matter of Hroncich v. Con Edison on Section 15(7), which stated that this section specified that:

Notably, in Johnson, while the carrier’s independent medical examiner opined that there was no further injury to the hips as a result of the knee injuries — which, if credited, would have potentially resulted in the claimant collecting the full SLU awards — the board’s choice to credit the opinion of the claimant’s physician that the injuries were not isolated from one another left an evidentiary gap as to what percentage SLU was related to the old and new injuries.

As such, the board’s decision to reduce the SLU based on the prior injury was affirmed.

In contrast, the credited evidence in Liuni was that the elbow and shoulder were separate and distinct pathologies causing independent losses of use of the arm. Consequently, the decision to reduce the SLU awards was reversed, and the matter was remitted for further consideration.

The decisions were reached 6-1, with one judge issuing a 19-page dissent that essentially would have gone further in its rationale.

The dissent maintained that the court should have disavowed Genduso entirely, set out the correct legal standard of review in both files, and remitted for further proceedings on the theory that the claimant in Johnson was improperly denied an opportunity to obtain evidence consistent with the court’s opinion.

So, what does this all mean for litigants in New York workers’ compensation proceedings?

In the first instance, the court’s decision to join these two cases in which divergent outcomes were reached based on different evidentiary offerings somewhat affects the clarity of its opinion, and to some degree supports the dissent’s point that the majority decision is an attempt at a thinly veiled reversal of Genduso that could have been made clearer.

In any event, it appears that the court’s overall conclusion is that SLU awards for injuries to the subparts of the same member are permissible so long as the claimant proves that the subsequent injury has caused an increase in loss of use of the overall member “by itself and not in conjunction with the previous disability.”

Litigation will be needed to parse out the precise application of this case, but what this decision appears to do is to set up an initial evidentiary burden of proof for the claimant on successive SLUs.

If a claimant can prove that the subsequent subparts — i.e., the hip or knee of the leg, or the elbow or shoulder of the arm — are two totally separate pathologies, the Genduso offset for one subpart against another of an overall member appears to no longer be applicable.

Although the precise evidentiary standard of what will constitute separate pathologies will need to be developed in case law, it is clear that this burden was met in Liuni by virtue of the testimony of the claimant’s doctor pointing to separate pathologies.

And, although it could have potentially been carried by the independent medical examiner in Johnson, if credited, it was ultimately not met in that case by virtue of the claimant’s doctor hedging on whether the hip and knee injuries were related or not.

In such as case, it would actually be less expensive from a claims administration standpoint had the claimant’s leg been fully amputated in an injury.

In any event, as the dissent notes, it is not entirely an obvious death knell to Genduso.

This decision begs the questions: If the medical professionals believe that a prior SLU for a subpart does affect a prior SLU for another subpart, is a claimant entitled to any increase whatsoever in an overall SLU award, or may the Genduso reduction apply in full, as in Johnson? Will there need to be separate legal determinations as to the level of SLU of both subparts, and the percentage to which the former injury contributes to the latter?

The Johnson/Liuni decision does not clearly state how these situations are to be addressed, though carriers will likely argue for a full offset based on the Johnson outcome.

For now, what appears clear for carriers is that the situations involving successive SLUs affecting the subparts of the hip, knee, elbow and shoulder need to be closely scrutinized.

Until the ramifications of this case are made clearer and the board sets up its own internal process regarding these issues, carriers for now are faced with an initial question as to whether they wish to obtain an independent medical examiner’s opinion on apportionment between subparts if the claimant’s initial burden is not met, though it remains to be seen whether claimants will be given additional opportunities at the board level to develop the record.

In cases where that burden is met, independent medical examinations on successive SLUs in these situations should, from now on — unless there is a legislative change to the statutory scheme — address whether there is any interplay between the first and second SLUs.

This may potentially set up a viable defense in situations where claimant’s counsel are otherwise likely to attempt to sidestep the court’s required evidentiary showing and argue that because the successive injuries were to separate subparts, the second SLU must necessarily be awarded in full.