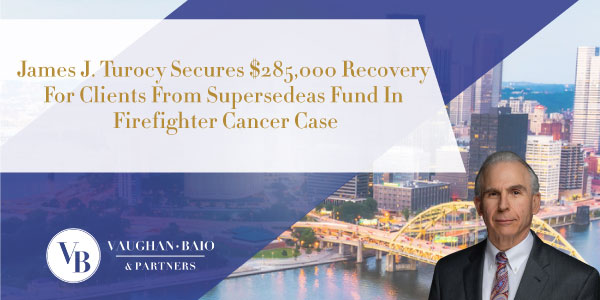 James J. Turocy, a Partner in the firm’s Pittsburgh office, secured a resolution for the City of Washington, Pennsylvania, and Selective Insurance in the case of a firefighter who developed a rare form of cancer following his retirement.

After six years pursuing and appealing this claim through parallel decisions being issued from the Commonwealth Court and Supreme Court of Pennsylvania, a settlement was reached which resulted in a $285,000 recovery for the City of Washington and its insurer. A substantive legal discussion of the case follows below.

The workers’ compensation judge credited the testimony of Mr. Florian and Dr. Francis, his medical expert. Dr. Francis opined that even though Mr. Florian’s form of cancer had no known cause and had not been associated with any occupational exposures, it was her belief that Mr. Florian’s cancer had indeed been caused by his exposures to carcinogens as a firefighter including some of the Group I carcinogens as referenced in the statute.

The City appealed and supersedeas was denied requiring Selective Insurance to pay ongoing total disability benefits and all medical bills and expenses beginning August 7, 2012. While the case was pending before the Workers’ Compensation Appeal Board, the Commonwealth Court of Pennsylvania issued its decision in City of Philadelphia v. WCAB (Sladek), 144 A.3d 1011 (Pa. Cmwlth. 2016), holding that in order to establish cancer as an occupational disease under Section 108(r), the claimant must show that the diagnosed cancer is caused by an IARC Group I carcinogen before he is entitled to the presumption of causation under Section 301(f). Accordingly, the Workers’ Compensation Appeal Board remanded Mr. Florian’s case for reconsideration.

On remand, the Workers’ Compensation Judge determined that “the sine qua non in order for claimant to succeed in his claim is to establish that claimant had an occupational disease according to Section 108(r) of the Workers’ Compensation Act before the invoking of the presumption discussed by the Commonwealth Court in Sladek. . . . Since the evidence does not establish that claimant had an occupational disease before the invocation of the presumption, claimant cannot succeed in his claim petition.” Mr. Florian appealed.

While the case was again pending before the Workers’ Compensation Appeal Board, the Supreme Court of Pennsylvania decided City of Philadelphia v. WCAB (Sladek), 195 A.3d 197 (Pa. 2018) regarding inter alia whether the application of the Frye standard is appropriate in firefighter cancer cases and whether an employer may rebut the presumption of causation based upon epidemiological evidence. In order to mitigate the further risk and costs associated with continued litigation, the parties agreed to settle the case with Mr. Florian withdrawing his appeal. The withdrawal of the appeal made the Workers’ Compensation Judge’s Order denying the Claim Petition final and paved the way for recovery from the Supersedeas Fund of Selective Insurance Company’s payment of the medical and indemnity benefits that were Ordered to be paid throughout litigation.